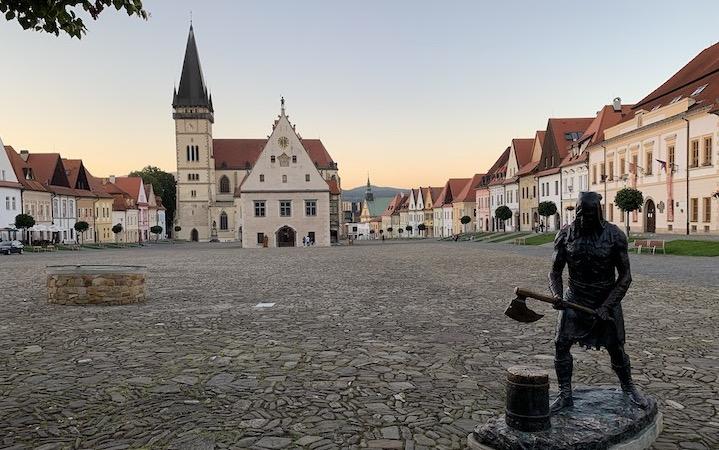 Are you a history lover? Bardejov town, hidden in North-East Slovakia is a true jewel where you can admire history. Some of our clients say it is a textbook of history. Read our travel blog and watch our short video on our YouTube channel. Enjoy!

Where do I start our tours?
I walk to the Heart of the Old town – to Town Hall square. I look around and enjoy the atmosphere. From 3 sites the square is surrounded by colourful fairy-tale houses (former burgher houses) and there are 2 dominant buildings – Basilica of St. Egidius and former Town Hall. Welcome to the most preserved medieval town of Slovakia. 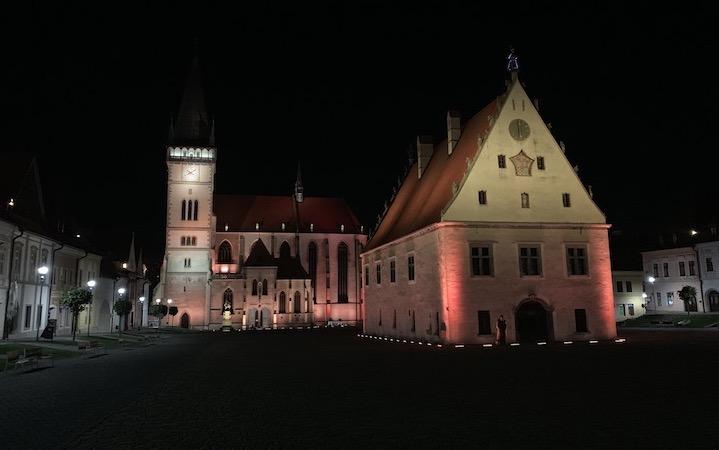 And mysterious night, photo taken in 2019 by Peter Blazicek

1, Basilica of Saint Egidius – one of the dominants of the square, standing in the northern part of the square, is Roman-Catholic gothic three-nave structure. The oldest parts of the church go back to the 14th century.
Inside, there are 11 late-gothic altars from the 15th and 16th centuries.
Two historical bells are located outside of the basilica, the smaller one – St. John was cast in 1486 was used until 1990, the bigger one – St. Urban was cast in 1584.

I recommend to get to the top of the church tower (no elevator, just stairs) and enjoy breathtaking, bird’s eye views. (there’s a small extra fee, but, it is definitely worth it).

Is it not a fairy-tale town? The former Town Hall / photo by Peter Blazicek

2, Town Hall – built between 1505 – 1511, in a Renaissance style.
The town hall was once the centre of the city administration, nowadays, it is a an exposition of the Saris Museum here.

3, Town Hall square – the rectangular square is the Heart of the the historical town. It is surrounded from 3 sides by burgher houses, St. Egidius basilica and Old town hall. Nowadays, in these houses are lovely and authentic little cafe’s, town hall, Tourist information office, museum of Icon (exhibition of Iconography).

4, Fortification system – it was Louis I who ordered the construction of the fortifications in 1352.
The walls and bastions are still standing and you can admire Powder Bastion (where gun powder and weapons were stored), Royal Bastion, the North Bastion (were archives were stored) and many more. 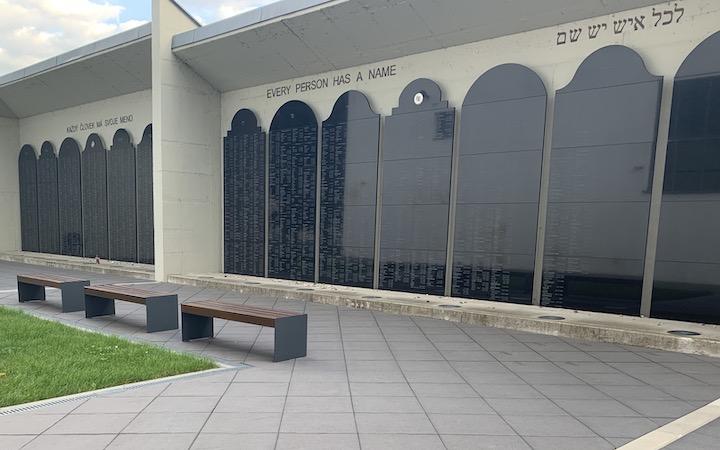 Inside the Jewish Suburbia – the Holocaust victims memorial

5, Jewish Suburbia
The historical Jewish quarter – Jewish Suburbia is located out of the city walls, it contains a number of Jewish sights built between the 18th-19th centuries. The Old Synagogue, bet bidras (school), a mikvah (ritual bath). The Bardejov Holocaust Memorial is near the entrance. It is very well reconstructed complex.

6, Franciscan church and monastery – standing near the town walls, built in the 14th century. Up to 1528, the church belonged to the Order of St. Augustin, later the Franciscan order moved in.

7, Bikur Cholim Synagogue – it is located in a Klastorsk street, few steps from the Town Hall square, an example of a well-preserved synagogue. The synagogue was established in 1929 by a Jewish charitable association called Chevra Bikur Cholim.

A SHORT HISTORY OVERVIEW
The oldest written documents go back to 1241. The arrival of German colonists after the Tartar invasion (an invasion between 1240-1241 at the present-day Slovakia and neighboring countries) started development of a prospering and flourishing medieval town.

The location was strategic as it lies on an ancient trade route connecting the Baltic sea with the Black sea.

Hungarian king Louis I gave privileges to Bardejov – free royal town and also ordered to build city walls and bastions around the town.

As trade and crafts expanded, the 15th century became “a Golden Age” for Bardejov and it ranked among the most important towns of the Kingdom of Hungary.

On the contrary, the 17th and 18th century, the series of Anti-Habsburg uprisings (uprising against the Habsburg Monarchy), the black plague epidemics paralysed the city economically and demographically.

Nowadays, Bardejov is one of the best preserved medieval towns of Slovakia. In the year 2000, it was inscribed into the UNESCO World Heritage list.

They remind the rich history with an annual Bardejov fair – Bardejovsky jarmok, an event hold every year in August when Bardejov come to life.
Around 4 days, hundreds of dancers, musicians, theatre, handicrafts, attractions, games and competitions for children. Bardejov fair is the closing event of the official Bardejov Cultural Summer.

1, Bardejov SPA
Only 10min by car you can find the Bardejov Spa, located in a picturesque valley surrounded by woods. The SPA has all the conditions to provide appropriate treatments for the respiratory system, circulation conditions and digestive tract.

Among the numerous guests were also Marie Louise – wife of French emperor Napoleon I, Russian Tzar Alexander I, Empress Elisabeth (Sisi) – wife of Francis Joseph I (Austrian emperor) and other prominent noblemen.

2, Bardejov open-air museum (skanzen)
Near the Bardejov SPA, you can find a Museum of Folk Architecture, the oldest open-air museum in Slovakia, where you can go back in time to the 19th – 20th century.
You can admire almost 30 different objects (wooden houses of peasants, mayor house, barns, wooden churches from Upper Saris region and North-eastern Zemplin region.

3, Hervartov UNESCO wooden church
Only 15min by car from Bardejov, you can find the oldest (and best preserved) wooden church in Slovakia, the Roman-Catholic church of Saint Francis of Assisi. It was built at the end of the 15th century in a gothic style, located at the end of the village Hervartov. Since 2008 it is on the UNESCO World Heritage list.

4, Greek-Catholic wooden churches
If you would like to see more wooden churches, visit remote villages located from Bardejov to the North-East, East.


Would you like to visit Bardejov?
Check out our premium GRAND TOUR OF SLOVAKIA